The Fort of Loreto and the Fort of Guadalupe, which were inaugurated as museums in 1972, were fortresses built in the 19th century.

Here took place the famous Battle of May 5th where General Ignacio Zaragoza, supported by a brave group of indigenous Zacapoaxtlas, defeated the French army in the spring of 1862.

The Fort of Guadalupe commemorates the event in its Site Museum, while the Fort of Loreto does so in its Museum of Non-Intervention.

According to the layout of the city of Puebla in the sixteenth century, the hill to the north has two peaks now known as Loreto and Guadalupe.

Before being a fort, this space was a chapel dedicated to the Virgin of Loreto. Religious worship lasted there until the second decade of the XIX century, although since the end of the XVIII century the site (not the chapel) also began to be used as a barracks and prison due to its strategic military location.

In 1813, in the midst of the War of Independence, the viceroyalty of Puebla proposed moving the city's explosives depot there, and in 1815 construction began on the fort itself, which was completed in 1817.

The Fort of Loreto was very important for the Mexican arms in the Battle of May 5th, 1862, and even served during the Mexican Revolution, at the beginning of the 20th century.

Currently the museum of the non-intervention shows how from its construction the fort was used in various events throughout the nineteenth century, both in struggles between political factions - federalists against centralists, liberals against conservatives, etc..

The tour inside the museum begins with the flags area, and then continues through the historical rooms, which cover historical events such as the Reform, the French Intervention and the Battle of Puebla. The museum also includes historical objects from the 19th century such as documents, oil paintings, military clothing and some of the letters that Benito Juarez exchanged with General Zaragoza.

What happened at Fort Loreto?

Fort Loreto was the scene of the battle of May 5, 1862 between the Mexican and French armies. The site has been noted for spreading Mexican nationalism, identity and pride.

It contains a collection of historical objects from the 19th century, including weapons, flags, documents, oil paintings, personal items and military clothing. The letters from President Benito Juárez to General Zaragoza, related to the battle, as well as paintings of the generals, stand out.

What to do in the forts of Loreto and Guadalupe?

The Fort of Loreto Museum contains a collection of historical objects from the 19th century, including weapons, flags, documents, oil paintings, personal items and military clothing.

The letters from President Benito Juárez to General Zaragoza, related to the battle, as well as the paintings of the generals, stand out.

The Fort of Guadalupe narrates in an interactive way the victory of the Mexican army over the French army, considered at that time as the best in the world, also describes the history of the building, from the hermitage of San Cristobal built in the sixteenth century, to its fortification, which integrated the chapel of Guadalupe, the atrium and the fort.

The museum exhibits objects and works of art from the 19th and 20th centuries: engravings, portraits, oil paintings, talavera coats of arms and coins, among others.

What was in the place before it became the Fort of Loreto?

Before being the Fort of Loreto, this place was used as a natural border to the valley and a place of passage to the lordships of Tlaxcala.

In this place there was a spring that was very useful for travelers, as they could quench their thirst and continue their journey to the city.

This elevation had, over time, several names: at first it was called Cerro de la Ermita, then San Cristóbal, then Cerro de Belén and, finally, Cerro de Loreto y Guadalupe, due to the construction of two temples on its summits dedicated to the Virgin Mary and the Virgin of Loreto.

What is the history of the Chapel of Our Lady of Loreto?

In 1655, the City Council authorized the construction of the chapel at the request of José de la Cruz Sarmiento, a native and neighbor of Puebla.

This personage when crossing the hill was surprised by a strong storm. In the midst of these circumstances he entrusted himself to the Virgin of Loreto; thanks to this, he was unharmed, however, his horse and birds were not so lucky, as they died instantly.

The following year he requested permission from the civil authorities to build a chapel in honor of the Virgin of Loreto on that site.

Being dedicated to the Virgin of Loreto, the tradition of having the same measurements as the Holy House of Loreto in Italy was taken up again.

After its construction in the seventeenth century, in the following century its worship was gradually forgotten, possibly due to the remoteness of the chapel from the urban center.

We know that at that time this chapel began to be used as a place of protection from possible attacks on the population, taking advantage of its excellent elevated location from where it was possible to observe any threat; sometimes it was also used as a military prison.

Where the Fort of Loreto Museum is located 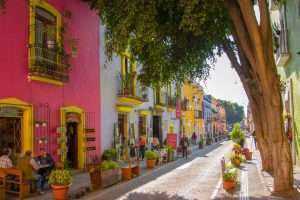