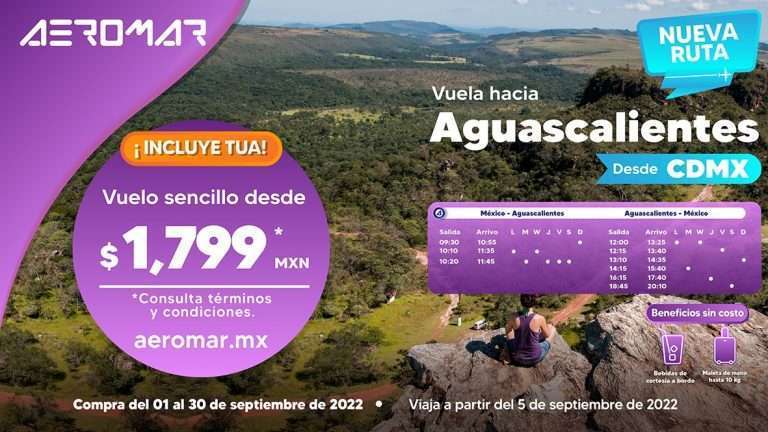 "In this way, businessmen, traders, congressmen and tourists, as well as the population in general, will have another alternative to travel between these cities, which contributes to the strengthening of tourism activity in the state of Aguascalientes," the airline said in a statement.

"Aviation contributes greatly to the diversification of tourism activity, and in Aguascalientes we have achieved synergy with the airlines that have been key to the recovery of this sector",

He emphasized that this reinforces the options for travelers to consider this state as part of their itinerary and take advantage of its tourist attractions. For this reason, he acknowledged and thanked Aeromar for considering this entity as a destination for the airline.

"With this new route, Aeromar consolidates its position as a regional supply option and confirms that the company has concrete plans for development and expansion in the short, medium and long term, based on the strengthening of the business plan."

Where to Buy this Airline Tickets

Where the State of Aguascalientes is Located

Aguascalientes is a destination with an interesting combination of charming natural surroundings, tradition and industrial development.

Outstanding for its manufacturing industry, especially textile, electronics and automotive, the state capital has become one of the tourist destinations with the best range of services in the Mexican Bajio.