Belonging to the National Institute of Anthropology and History, the Regional Museum of Puebla houses a collection of extraordinary cultural value and attraction, ranging from the origins of prehistory and pre-Hispanic times, through the conquest and colonial period of Mexico, through the independent period and the Porfiriato, to the Mexican Revolution.

The Regional Museum of Puebla, which was inaugurated in 1974.

The Regional Museum of Puebla has four halls, with archaeological, colonial, Independence and Revolutionary collections.

The origin of the American man

This room exhibits tests with the clay of the first settlers of the continent. They also exhibit remains of the first crops, as well as specimens of the oldest corn, which were found during explorations in the cave of Texcal, Tehuacan Valley.

Here you can find an explanation of the Preclassic, Classic and Postclassic periods in the region through models. Also on display are Mexica basalt sculptures, one of the goddess Chicomecóatlo and others representing the gods of spring and war.

Puebla is one of the cities of Mexico with more historical richness during this period. In this room is exhibited the replica of the first baptismal font, in addition to other objects of the religious and monarchical life of the sixteenth century in this city.

This room has objects of great artistic quality and historical significance. Its collection of pieces that show the industrial and artisanal development of the region during the viceroyalty is outstanding, as well as aspects of culture, religion, kinship system and political organization.

What is the 5 de Mayo Civic Unit?

In 1962, as part of the commemoration of the centenary of the battle of May 5, 1862, a project was created called 5 de Mayo Civic Unit, commissioned to architect Abraham Zabludovsky.

This architect developed the projects of the Auditorio de la Reforma, the fountain dedicated to General Ignacio Zaragoza, the urban planning of the area, the restoration of the Fort of Loreto, the consolidation of the Fort of Guadalupe, as well as the creation of the school of craftsmanship of the state, which later became the Regional Museum and the INAH-Puebla center.

What was in the building before the Regional Museum of Puebla existed?

It was the state's handicraft school, which later became the Regional Museum and the INAH-Puebla center.

In the first instance, starting in 1974, the state school of handicrafts gave INAH a space in this property to house the regional offices and the Regional Museum of Puebla, adopting its current image after carrying out a remodeling project in the same year.

Where is the Regional Museum of Puebla located? 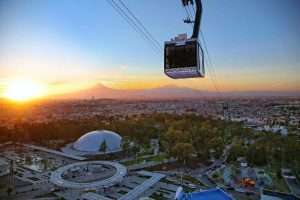