Hill of San Miguel in Atlixco, Viewpoint and Chapel

The 32 States in Mexico >> State Of Puebla >> Atlixco, Puebla The Hill of San Miguel in Atlixco Puebla is a natural icon and a unique attraction for visitors.

It is nestled in the heart of the magical town and therefore offers incredible views from its summit, where there is a chapel, the church of San Miguel Arcángel. Look for the swing on the side of the hill for a photo with an unforgettable view.

If you like to walk and discover wonderful places surrounded by nature, we suggest you climb to the top of the hill. There are 4 viewpoints at different points where you can appreciate the town, the countryside, the sunrise or sunset and have the best views of the Popocatepetl volcano.

Also known as Popocatica (hill that smokes) or Macuilxochitpec (hill of the five flowers), it is the place where the main festival of Atlixco takes place on the last Sunday of September and for which the representatives of the eleven cultural regions of Puebla gather in the Plazuela de la Danza.

What is the Legend of the Cerro de San Miguel in Atlixco?

According to the villagers, the devil was on the loose during the feast of St. Michael the Archangel, because every September 29th there was a representation of St. Michael's fight against the Devil.

This tradition consists of placing a small statue of the Devil in the chapel, made of wood and painted black; it was tied to a pipe, placed against the wall and left there all night long.

The curious thing is that the next morning the altar boys would come to remove the little devil from the wall, but it would dawn with messages written on its back, sometimes even prayers from people asking for miracles.

However, that was not all, since it seems that on the day of the performance, the people of the town became more violent, as there were different fights and robberies in the streets of the town.

Violence began to grow in Atlixco over time, so the priest decided to lock the figure of the devil in the basement of the church, until 1985 when it disappeared and was never heard from again. It is said that the statue was more than 150 years old before it disappeared.

But there is another version about the disappearance of the devil, and this is attributed to a merchant of the region that one day he had too much to drink, stole the statue of the devil and went to sell it to the Cantina del Peñón de Atlixco in exchange for a few drinks.

How to climb the San Miguel hill in Atlixco?

The most touristic way is to start climbing from the Escalera Ancha, cross the Fray Toribio de Benavente square and continue the ascent to the hill from the Tláloc ring road. The ascent itself will show you the way, since cars can only reach a certain point of the hill.

The trail from the base of the Escalera Ancha to the top of the San Miguel hill is approximately 1.2km and 22 minutes of ascent. A local will know how to climb more quickly and by more direct routes, although perhaps more strenuous for a non-native.

What is there and what is the Chapel of Cerro de San Miguel in Atlixco like?

The Chapel is located at the top of the hill, from there you can access the atrium and admire the valley of Atlixco in its 360° viewpoint.

The Chapel of San Miguel was built in the XVIII century, its interior preserves a neoclassical altarpiece at the back and a very primitive stone pulpit.

Every September 29th, hundreds of the faithful come to celebrate the Archangel Saint Michael. Sometimes this celebration coincides with the Huey Atlixcáyotl and makes the party even bigger.

The sculpture of the Archangel St. Michael is kept every year in the Church of La Soledad and is taken out 8 days before the celebration to be taken up to the chapel.

It is very common during the month of September to hear the mañanitas (in different versions) through the loudspeakers of the chapel and this is heard throughout Atlixco.

Where the Cerro de San Miguel in Atlixco is Located 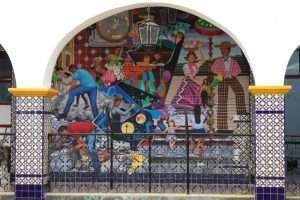