Where to Go & What to Do

Weather data of this location not found.

Puebla is one of the oldest cities in Mexico. Its layout, also attributed to the angels, dates from 1532.

Its good climate and strategic location soon made it the second most important city in colonial Mexico.

On the route to Mexico City, the merchandise ships coming from the Philippines first passed through Puebla, which little by little assimilated some artistic expressions from the East.

This is reflected in the precious Talavera vases and tableware, as well as the tiles that adorn the façades of churches and mansions, fountains, patios and kitchens. 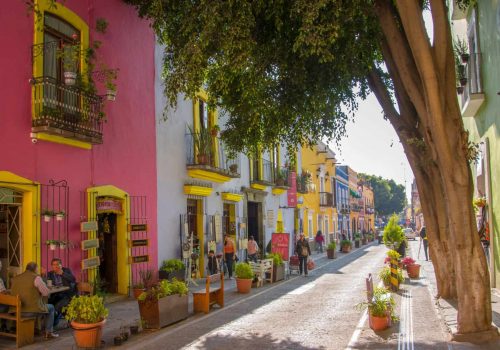 If there is one word that defines Puebla, it is "baroque". Complex flavors that seduce the palate, elaborate shapes that catch the eye, an irresistible mix of legends and stories, winding streets, fountains, gardens, craft markets and artistic alleys and a skyline studded with church domes.

That is why it is not unreasonable to think that Puebla is where the angels live.

With its almost 365 baroque domes outlining the horizon; the delirious flavors of its gastronomy, such as mole and chiles en nogada; the intense blue of its Talavera; its colonial mansions turned into museums and hotels and, as if that were not enough, the hospitality of its people.

It is known for its large number of churches, its traditional colonial architecture in the historic center, which is a UNESCO World Heritage Site.

Also for its museums, for its ceramics, for the baroque art on the facades of its buildings, for its gastronomy, by the modernity of the Angelópolis area and its proximity to Mexico City.

What is Puebla City known as?

It is known as Puebla de los Angeles because of a legend of 1538 where the Bishop of Tlaxcala in his dream appeared to angels who guided him to a place where there was a lot of vegetation and dozens of springs, once there, the angels with a rope marked boundaries within the place, thus establishing where the city of Puebla should be.

It is also called Angelópolis - City of Angels - .

Its official name is Puebla de Zaragoza designated by Benito Juarez in honor of Ignacio Zaragoza for the Battle of Puebla.

What is the best area in Puebla City?

The historic center if you want to walk and discover its colonial architecture and enter various museums and impressive churches.

The Angelópolis area if you want to visit the most modern shopping, residential and lodging centers.

What to do beyond Puebla City?

The Magical Town of Cholula is located within the metropolitan area of the city of Puebla - 9 Miles Away .

You can also visit the Africam Safari Park - 11 miles away - .

Val Quirico Tlaxcala is 14 km away.

What to See and Do in Puebla City

The 10 Best Museums in Puebla City

13 Ideal Places for Families and Children in Puebla

Where Puebla City is located

Distance between Puebla and Other Cities